Posted on September 1, 2019 by Sassybear 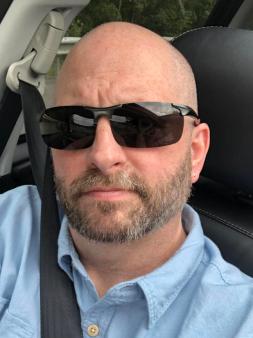 In an effort to change our weekend habits of lounging about on the couch for a better part of the mornings, we got ourselves up, showered, and dressed, harnessed the pups, loaded everyone into the car, (that’s me in my car cruising face, above) and went for a drive to find a place to take the dogs (and ourselves) for a walk while the temps were cooler. Then we dropped the dogs off back at home, and headed out to shop for a new living room table set.  Our current coffee table and end tables were purchased on the cheap, as a temporary solution, until we found something better. Three years later, the tables are falling apart and it was time to find something better. We did (Thank you Labor Day Sale – we even scored free delivery. Woohoo!); then grabbed some groceries and came home to enjoy the rest of the afternoon relaxing with the dogs. I also managed to work in a  couple rope-jumping sessions on the back patio.

Later, after waking from an unplanned nap while watching “Captain Marvel,” we whipped up a pretty tasty dinner. There is an upside to eating healthier…we have far more interesting and diverse-flavored meals, as I scour the inter-webs for low carb, gluten free recipes. Tonight, we had grilled Tuna Steak and grilled Brussel Sprouts (both seasoned with EVOO, salt and pepper) with a lemon cream sauce. I found the sauce recipe while Jeffrey was grilling the fish and sprouts and whipped it together, lickety split. It was made from butter, cream, garlic, lemon zest, lemon juice, chicken broth, and a little corn starch for thickener, whisked together over a medium heat. It was pretty damn good, if I do say so myself.

There are no Sunday blues for us tonight, as we have tomorrow off (one of the perks of being civil servants – we get Labor Day off.) We have no specific plans for the day, but I’m sure it will be at least as enjoyable as the last 3 days have been, since we’re not at work. I weigh in every Monday night, so I am hoping to see continued success from my efforts to lose 50 pounds in 52 weeks when I step n the scale tomorrow afternoon.