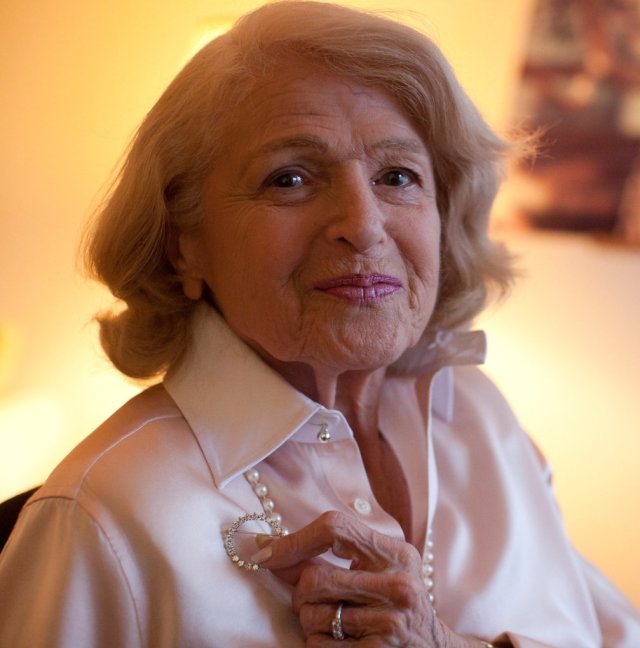 Edith “Edie” Windsor (June 20, 1929 – September 12, 2017) was an American LGBT rights activist and a technology manager at IBM. She was the lead plaintiff in the Supreme Court of the United States case United States v. Windsor, which successfully overturned Section 3 of the Defense of Marriage Act and was considered a landmark legal victory for the same-sex marriage movement in the United States.

Windsor met Thea Spyer, an Amsterdam-born psychologist, in 1963 and began dating in late spring of 1965. To help keep the relationship a secret from her co-workers, Windsor invented a relationship with Spyer’s fictional brother Willy — who was actually a childhood doll belonging to Windsor — to explain Spyer’s phone calls to the office. In 1967, Spyer asked Windsor to marry, although it was not yet legal anywhere in the United States. Fearing that a traditional engagement ring might expose Windsor’s sexual orientation to her coworkers, Spyer instead proposed with a circular diamond pin.

In 1977, Spyer was diagnosed with progressive multiple sclerosis. The disease caused a gradual, but ever-increasing paralysis. Windsor used her early retirement to become a full-time caregiver for Spyer, and the couple continued to adjust their daily behavior to accommodate.

Windsor and Spyer entered a domestic partnership in New York City in 1993. Registering on the first available day, they were issued certificate number eighty.

Spyer suffered a heart attack in 2002 and was diagnosed with aortic stenosis. In 2007, her doctors told her she had less than a year to live. New York had not yet legalized same-sex marriage, so the couple opted to marry in Toronto, Canada, on May 22, 2007. An announcement of their wedding was published in the New York Times. Spyer died from complications related to her heart condition on February 5, 2009

Upon Spyer’s death on February 5, 2009, Windsor became the executor and sole beneficiary of Spyer’s estate, via a revocable trust. Windsor was required to pay $363,053 in federal estate taxes on her inheritance of her wife’s estate. Had federal law recognized the validity of their marriage, Windsor would have qualified for an unlimited spousal deduction and paid no federal estate taxes.
Windsor sought to claim the federal estate tax exemption for surviving spouses. She was barred from doing so by Section 3 of the Defense of Marriage Act (DOMA) (codified at 1 U.S.C. § 7), which provided that the term “spouse” only applied to marriages between a man and woman. The Internal Revenue Service found that the exemption did not apply to same-sex marriages, denied Windsor’s claim, and compelled her to pay $363,053 in estate taxes.

In 2010 Windsor filed a lawsuit against the federal government in the U.S. District Court for the Southern District of New York, seeking a refund because DOMA singled out legally married same-sex couples for “differential treatment compared to other similarly situated couples without justification.” In 2012, Judge Barbara S. Jones ruled that Section 3 of DOMA was unconstitutional under the due process guarantees of the Fifth Amendment and ordered the federal government to issue the tax refund, including interest. The U.S. Second Circuit Court of Appeals affirmed in a 2–1 decision later in 2012. The U.S. Supreme Court heard oral arguments in the case in March 2013, and in June of that year issued a 5–4 decision affirming that Section 3 of DOMA was unconstitutional “as a deprivation of the liberty of the person protected by the Fifth Amendment.”
On September 26, 2016, Windsor married Judith Kasen at New York City Hall. At the time of the wedding, Windsor was age 87 and Kasen was age 51.

On September 12, 2017, Windsor’s wife Judith Kasen-Windsor confirmed that Windsor had died in Manhattan, but did not specify a cause. Former US President Bill Clinton, New York Governor Andrew Cuomo, California US Senator Dianne Feinstein, and various politicians and celebrities posted words of tribute on their Twitter accounts. Former Secretary of State Hillary Clinton spoke at her funeral.

This entry was posted in Uncategorized. Bookmark the permalink.

Leave a Reply to anne marie in philly Cancel reply