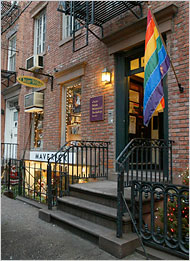 The Oscar Wilde Bookshop was the first bookstore devoted to gay and lesbian authors. It was founded by Craig Rodwell on November 24, 1967 as the Oscar Wilde Memorial Bookshop. It is named after author Oscar Wilde.

As a member and vice president of the Mattachine Society, Rodwell sought to make Mattachine more visible to gays and society at large by opening a storefront to cater to the growing local gay community.

Rodwell did not consider himself to be a bookseller businessman but, rather, a person who set out to help change the world’s view of gay people and of gay people ‘s own self-image. Despite a limited selection of materials when the bookstore was first established, Rodwell refused to stock pornography and instead favored literature by gay and lesbian authors. Early organizing meetings for the first Pride Parade in New York City were held at the bookshop in 1970.

Rodwell sold the bookshop in March 1993 to Bill Offenbaker, three months before Rodwell’s death of stomach cancer. In June 1996 Offenbaker sold the store to Larry Lingle. In January 2003 Lingle announced that the bookshop would close due to financial difficulties. Deacon Maccubbin, owner of Lambda Rising bookstores, purchased the bookstore to prevent the historically significant bookstore from closing. In 2006, the bookstore was purchased by longtime manager, Kim Brinster.

The bookstore closed on March 29, 2009, due to declines in sales caused by the economic crisis amid extreme competition with online book sellers. It was part of a spate of LGBT brick and mortar bookstores closures in the early 21st century, including Lambda Rising’s Washington store and A Different Light in Los Angeles and San Francisco.