National Dog Day celebrates all breeds, pure and mixed and serves to help galvanize the public to recognize the number of dogs that need to be rescued each year, either from public shelters, rescues and pure breed rescues. National Dog Day honors family dogs and dogs that work selflessly to save lives, keep us safe and bring comfort. Dogs put their lives on the line every day – for their law enforcement partner, for their blind companion, for the disabled, for our freedom and safety by detecting bombs and drugs and pulling victims of tragedy from wreckage.is recognizing our past and present puppy loves.

I am recognizing the day by acknowledging the three dogs that have helped make our house a home and our lives complete.

The first four legged love of our life was Clyde E. He came with the name Clyde, which we were not inclined to change since he knew it well, but added the middle initial “E” since everyone called him “Clydie” anyway. We adopted him when he was 5 from my brother and sister-in-law and had him until he was 12. He was a Rat Terrier Chihuahua mix (“Ratwawa”) that we loved more than we ever knew possible. He had his own facebook page, with more friends than we had, and we never wanted for a dog-sitter – people volunteered to take him and would ask when we were going out of town again so they could dog sit him. Harvey was a “one-dog only” dog and did not tolerate any other dog in his home, especially if we showed any attention to them. He wanted us all to himself, and was living proof of the saying  “some dogs think they’re humans , but Rat Terriers know they are human.” He always wanted to be in the same room with us and any of our guests, and was never content unless he was snoozing on somebody’s lap. We said a very painful good-bye to him 8 years ago, and still miss him every day. 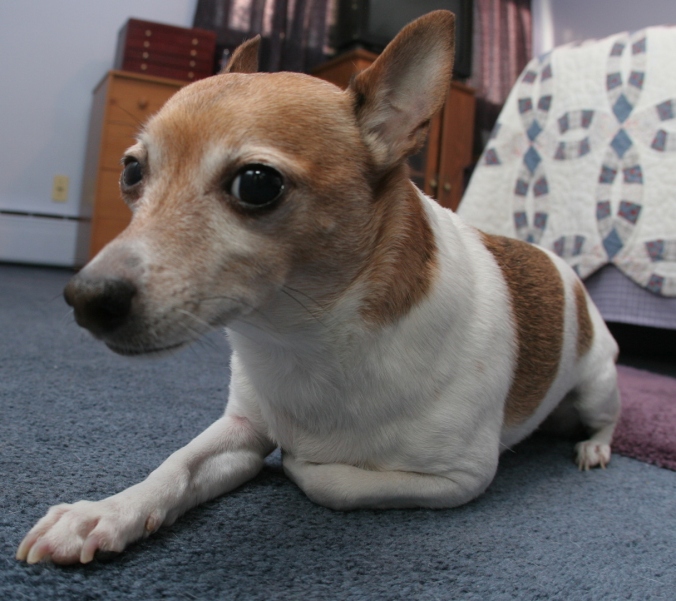 It was almost 2 years before the pain faded enough that we could ever consider another dog, and I’m so glad that we did, else we’d have missed out on our next hirsute heart-throb, Harvey Milk  Harvey is believed to be a Chihuahua / Dachshund mix, and  was named after the assassinated, openly gay politician and gay activist Harvey Milk.  Harvey was born and abandoned in Kentucky and came to us via a rescue organization at 12 weeks old. Jeffrey held him and it was a done deal – love at first cuddle. Despite his now 5.5 pound diminutive size (a pound heavier than he was when we adopted him) Harvey loves his head scratched, and is lord of the manor! He is constantly herding us all into the same room where he can keep an eye on us, and is very vocal about his displeasure should one of us attempt to leave the house, the room, or the sofa. And he does not willingly share toys, food, affection or anything – period. His greatest weapons are his big, beautiful eyes which he will train on you if he feels you have failed to show him the proper amount of attention, affection, failed to share your food with him, or wronged him in any way.  And they are irresistible, especially when couple with the famous Harvey “ear droop” so don’t bother trying to say no once he’s fixed his gaze on you.  Can’t be done.

Our most recent (although not recent) fanged family member is Rita Mae. Rita is believed to be a Jack Russel Terrier / Dachshund mix, and was named after Rita Mae Brown Rita was adopted just 3 months after Harvey from the same rescue organization. Rita was found abandoned, and guesstimated to be 2 years old at the time we adopted her. This time, it was my turn to fall in love at first sight, which i did from across a crowded room of people and barking dogs. Although terrified of us, Harvey, and our house at first (we suspect there was some prior abuse) Rita is now incredibly affectionate. She is terrified of sudden, loud noises of any kind and also of rain, thunder, or lightning storms, or even loud winds, and is inconsolable when she is scared. Despite her small size, she is 11.5 pounds of almost pure muscle and can knock the breath out of you if you are unprepared for her pounce. She sheds like a mofo and licks us, herself, and anything else compulsively, unless we intervene. She snores when she sleeps, snorts like a pig when awake, and when she barks it is LOUD. With her little round belly, which she loves to have rubbed or scratched, we often joke she’s the pot belly pig I always wanted. Despite her seemingly un-ladylike qualities, she is my little princess, and can do no wrong in my eyes.

While Harvey and Rita (their names are often sung to the tune of  “Hava Nageela”) never got to meet Clyde, we often share stories about their “older brother”,  usually when we’re drinking wine, and then re-tell them the story of their adoptions  and how they changed our lives. I have forbidden either of them to ever pass away, insisting that they be here to share in my retirement with me. Its still hard to leave them behind when we go away, and they always make even the worst days a little better. They are our “kids” and we love ’em to pieces.

Happy National Dog Day to all you Dog Daddies and Mutt Mommies out there.

Breenlantern@gmail.com
Join 242 other subscribers
Follow Idle Eyes and a Dormy on WordPress.com