Grin and Bare(ly survive) it 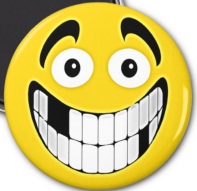 At a recent dental visit, I got some awful news: 3 of my teeth had fractured and needed to be extracted. I have no idea how they fractured, and I was stunned to receive the news that, as a 47 year old, I would be losing 3 teeth.  This was a nightmare come true.

My parents did not have medical or dental insurance during my youth, so I never went to a doctor or dentist.  Our dental care was brushing our teeth and avoiding activities that might knock our teeth out. Both my parents had dentures, and had several friends missing teeth, so I grew up believing being poor meant eventually losing your teeth.  I had recurring nightmares in which all of my teeth fell out (and have continued to have them, although less frequently, throughout my adult life.) However, I had been pretty lucky. While I never benefited from braces or regular teeth cleaning or dental care, I had fairly healthy teeth until I was an adult.

For the first 10 years after moving out on my own, my first several jobs were in retail and I did not have dental insurance at any of those jobs. In my late twenties, prior to starting my work at my current agency (which does offer dental insurance, thankfully) I got a cavity that became so painful I could barely breathe without feeling intense pain. I had a friend who had a dentist that she insisted I go see. I told her I couldn’t go, due to lack of insurance. She told her dentist  about me and they asked for my home phone number. The dentist’s receptionist (his wife) called and left me a message telling me my friend had given them my name, that they understood I did not have insurance, but that they could work with me on a payment plan and were more concerned that I get help with my tooth. I swallowed my pride and called them.  It was the start of a 15 year relationship. Even once I obtained dental insurance, and they were not in my network of providers, I stuck with them because they were so good to me when I was younger, broke, and needed help. My husband (boyfriend at the time,) Jeffrey, started going to them, too, at my recommendation. They always made going to the dentist as enjoyable and affordable as possible, and took good care of us. Then my dentist retired and sold his practice to a new, younger dentist. After 2 visits, I decided I hated the new dentist. Jeffrey agreed, so we never went back.

Regretfully, I did not actively pursue finding a new dentist for a couple of years, until recently, when I lost a part of a tooth. This was a stupid thing for me to do – wait to find a new dentist. With all the digestive issues I’ve had and medicines I’ve had to take over the years, I knew the health of my teeth was at risk and needed constant care, but I dropped the ball and, ultimately, would pay the price for my lack of effort.

I found a new dentist (within my network) about 2 months ago, braced myself for bad news, and went in for my initial check-up and consultation. While I knew one tooth would probably need extraction, I was not prepared to discover I had 3 cavities that needed a drill & fill,  and 3 teeth that needed extraction.  I was shocked.  As I stated, I grew up with a  fear of losing my teeth and now it was happening. I made an appointment for extractions (which needed to be done at another location) and, in the meantime, went for 2 follow-up appointments for teeth cleaning and cavity repair.

This past Friday, I went for my extractions. Upon being ushered into the dental office, I was asked if I wanted to be put under or just get local anesthesia (an option I was not given when making my appointment.)  I said I’d prefer to be put under.  However, the dental assistant then asked if I’d had anything to eat or drink that morning and, since I said I’d had coffee, she said I’d have to reschedule if I wanted to be put under since I had not properly fasted (something I’d gladly have done, had I known it was an option.) Since Jeffrey and I had already taken the day off for this appointment, I did not want to reschedule and opted for the local anesthesia so we could proceed with the extractions.

This was me, just prior to the extractions, unhappily bracing myself for the experience. Does my expression give my apprehension away? 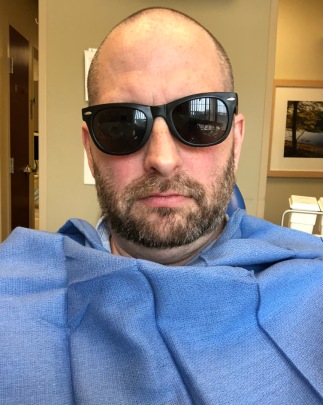 That decision was a BIG Mistake.

Despite being numbed, the first two extractions still hurt, but the third and – much to my surprise – fourth extractions were excruciating. There was a fourth tooth (an errant wisdom tooth) that had fractured and grown up under my fractured molar so both had to be extracted. I was moaning and arching my back and it was all I could do to not knock the dentist’s hand away and then punch him in the face and stomp on his testicles.  Had I known it was going to be this painful, I would have rescheduled it so I could be knocked out.

We had tentative plans to attend a Travers party on Saturday (which really has nothing to do with the Travers…it’s just an excuse to have a party,) stay for an hour, then head to a 50th birthday party out of town Saturday night, pending how my extractions went (I know, a little unrealistic and optimistic, but I really wanted to go!) However, as soon as I got home Friday, I sent my regrets to everyone – there was no way I was going to be feeling well enough to attend any parties, let alone eat or drink anything.  I was unable to talk for the remainder of Friday, and spent both Friday and Saturday on the couch, trying to rest and keep the bulk of pain at bay with Tylenol and Advil. Jeffrey, being the super awesome caretaker, husband, and partner hat he is, didn’t make me (or let me) feel bad about cancelling our plans, and then proceeded to wait on me hand and foot. He made sure I was comfortable and, once he was sure I would be OK to be alone for an hour, went to the store and got me some instant ice packs and soft foods (broth, soup, jello, pudding, mashed potatoes, etc.) and spent the day with me at home, watching whatever I wanted to watch and getting me anything I wanted or needed. (I have NO doubt I would never have survived any of the stuff I’ve gone through – emotional, medical or physical – over the last 22 years, if Jeffrey had not been with me through everything, as a constant source of encouragement, understanding, and support. The guy is a *&%$#@!@# SAINT!)

I also had this emotional support puppy princess to help calm and comfort me. 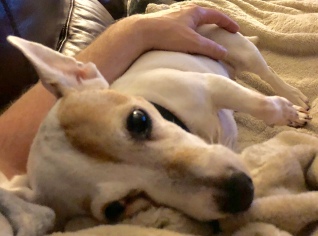 She was Rita Mae-zing!  Harvey stayed with me too, to protect me, but was away on one of his yard patrols when this was taken (and seems to have fully recovered from his Bee sting. Whew!)

Today, I am slightly better, although still sore, and still having what feels like PTSD from the extractions.  Fortunately, the pain has kept me distracted from the embarrassment of the missing teeth, which hopefully won’t be too visible when I laugh or smile (thankfully, they were side and back teeth.) Regardless, I’ll be cautious about exposing my missing teeth through smiles or laughter until I can get bridges or implants to fill the gaps. 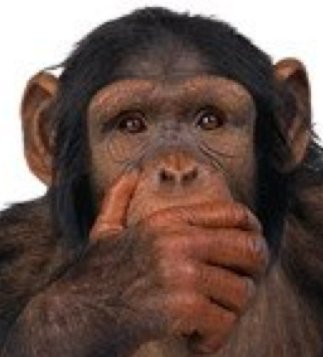 I just hope ALL my nightmares don’t come true, because I do NOT want to be back in highschool, unable to find my locker, wandering through the halls in my underwear, late for class, and trying to find a bathroom while avoiding the bullies looking for me; all the while trying to scream and not making a single noise…

….with my toothless mouth wide open.

11 Responses to Grin and Bare(ly survive) it