Same-sex marriage in the United States was initially established on a state-by-state basis, expanding from 1 state in 2004 to 36 states in 2015, when, on June 26, 2015, same-sex marriage was established in all 50 states as a result of the ruling of the Supreme Court of the United States in the landmark civil rights case of Obergefell v. Hodges, in which it was held that the right of same-sex couples to marry on the same terms and conditions as opposite-sex couples, with all the accompanying rights and responsibilities, is guaranteed by both the Due Process Clause and the Equal Protection Clause of the Fourteenth Amendment to the United States Constitution. While Sassybear and his hubby had already tied the knot way back in 1999 (without any legal recognition at the time) this landmark ruling impacted them no less and they can assure you, they will never take their committment, marriage, or the benefits that come with it (finally) for granted.

The Stonewall riots (also referred to as the Stonewall uprising or the Stonewall rebellion) were a series of spontaneous, violent demonstrations by members of the gay (LGBT) community against a police raid that took place in the early morning hours of June 28, 1969, at the Stonewall Inn in the Greenwich Village neighborhood of Manhattan, New York City. They are widely considered to constitute the most important event leading to the gay liberation movement and the modern fight for LGBT rights in the United States. Sassybear and his hubby, friends, and community could not live the lives they do now, if not for this landmark event and the brave people who stood up and fought back. 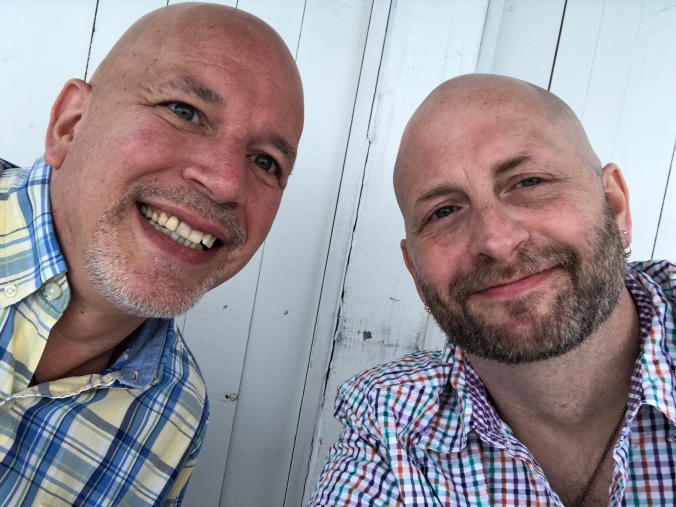 On this day in 2012, Sassybear was innocently attending a fundraiser for a gay bowling tournament in a gay bar (“The Chez Est”) in Hartford, CT with his hubby and new CT bowling friends, when he met someone who would subsequently become the other man in his life: Jim aka the BF (known, more affectionately, as “Boo” off-blog). While it is impossible to put into words how important and entwined this man has become in his life, Sassybear knows he is lucky to have not one, but two, amazing men in his life. Also, he knows he will never be ridiculed for his giraffe, comic book, and Cosmo obsessions since Jim shares a love for Cosmos and has his own obsessions: Tiggers and Teddy Bears (and dishes, and mermen, and fine linens, and underwear, and … well, you get the picture.) While we are each married to wonderful men, we share a special bond of love and support that my Mother lovingly refers to as “Weird.”

7 thoughts on “This Monumental Week in Gay History”