Yesterday, while the hubby headed off to his monthly massage, I got domestic: I ran to the grocery store, put on laundry when I got home, cleaned, took out the garbage, and sewed a button onto one of hubby’s shirts that had fallen off in the wash.

After that, we chilled out for a bit and watched “The Pass” starring Russell Tovey, a movie based on a  stage play written by John Donnelly, (in which Russell played the same part.) It’s a tough movie to watch, but only for dialogue and plot.  Seeing Mr. Tovey shirtless in most of the film, and in just BVDs for one-third of it, was a pleasant treat. (Not that his co-star, Arinze Kene, was any less enjoyably to look at, mind you.)

We’ve been a big fan of Mr. Tovey since we first saw him as the werewolf  George Sands in BBC’s supernatural drama “Being Human”, then as Steve in “Him & Her”, then as Kevin in “Looking” and more recently as the superhero Ray Terrill (aka The Ray) in “Legends of Tomorrow.”

After that, we watched a documentary called “What’s with wheat?” which explored the world’s growing intolerance to wheat and gluten (yours truly being among those inflicted with such a malady.)

Rested and relaxed, we got ourselves prettied-up and headed out to an early birthday dinner celebration with 4 friends  with whom we’ve been doing  group birthday dinners off and on for several years now.  To my surprise, I received some sweet Birthday Swag: 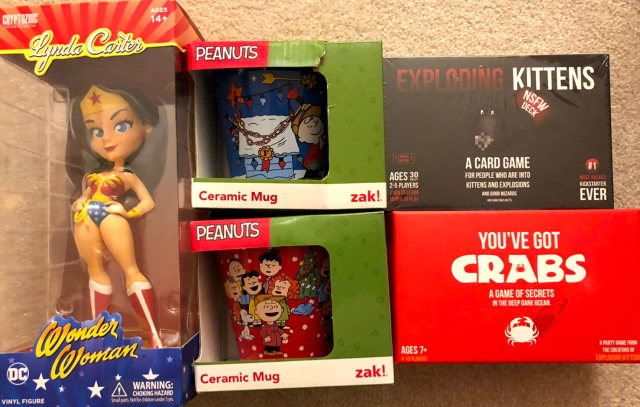 I also got this new, wicked cool Giraffe Pic (on the right), which I hung in my guest room this afternoon:

And here’s Wonder Woman out of the box:

This morning, I set the table and prepped breakfast for my Mom. Jeffrey went and picked her up and we had a nice Mother’s Day breakfast together at our house. Then we took her home and put in two of her air conditioners for her. She needed a new third one because she and my cousin dropped one out the second floor window when they were trying to put it in the window. Sigh. So, we ran out and grabbed one at Lowe’s and came back to put it in for her. Unfortunately, Mom’s health seems to be declining rapidly, so we are trying to do more stuff for her around the house and check in on her more.

When we got home, we put our own two air conditioners in, upstairs. Although we had central air installed when we first bought the house 6 years ago, the cool air can’t seem to do the job on the second floor, despite vents in both rooms, so it’s an oven up there without the ACs. (Not that I’m complaining about warm weather, mind you.)

All, in all, it was a “little bit of everything” kind of weekend: productive, relaxing, and entertaining.